Yesterday, we hosted an Ansible Meetup at at Knowlarity Bangalore office. It was a wonderful gathering, interactive sessions which included cute as well as dangerous questions :p
Here are some exciting pics from the event:

We had 5 sessions which covered Introduction to Ansible, advanced topics as well as contributing to Ansible.

Getting started with Ansible-playbook

Speaker: @ravdeep003
Slides: click here
Summary: In this talk, Ravdeep gave an introduction to Ansible playbooks, inventory, modules, variables and a typical directory structure of an Ansible project. The session was very interactive with many participants completely new to Ansible. The demo session, especially got people excited.

Speaker: @ImNagri
Slides: click here
Summary: In this talk, Hussain demonstrated how to use Ansible as a python library and expose custom APIs. His project used python flask to expose web APIs which was called from a remote server. The remote server had a beautiful WebUI built using bootstrap and javascript. The architecture was discussed in detail.

Speaker: @rohit01
Slides: click here
Summary: In this talk, I did a demo of Ansible cloud modules - AWS EC2 and Route53. The talk started with a quick introduction to AWS followed by a live demo. In the demo, I uploaded my public ssh key into AWS EC2, created a security group, launched two WordPress instances, created an ELB, register the newly created instances behind ELB and added an entry in Route53 nameserver. It demonstrated the power of Ansible to manage public clouds and define infrastructure in the form of simple YAML files.

Speaker: @hellodiku
Slides: click here
Summary: In this talk, Deepak talked about writing custom Ansible modules. The talk started with a quick introduction to key concepts and then focused more on code structure. The demo highlighted the coding structure of Ansible project, while keeping it simple. His demo module is hosted in his github repository 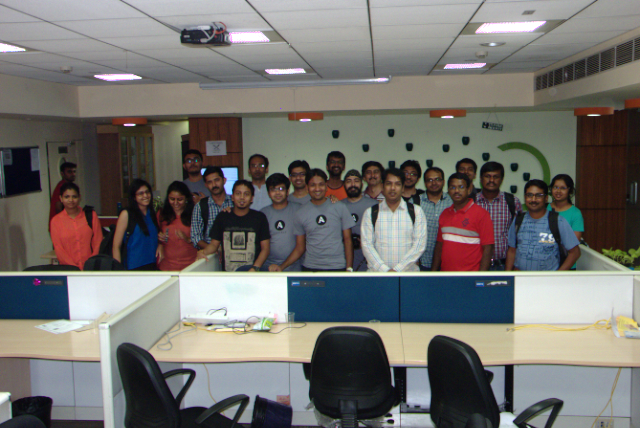 Tweets on this event :-D

And as always, Thanks for reading :)