We all know, Income Tax is a major source of revenue for government expenditures. But, do we know the impact and effectiveness of Income Tax laws in India?

Few basic questions, that will help us understand the situation: 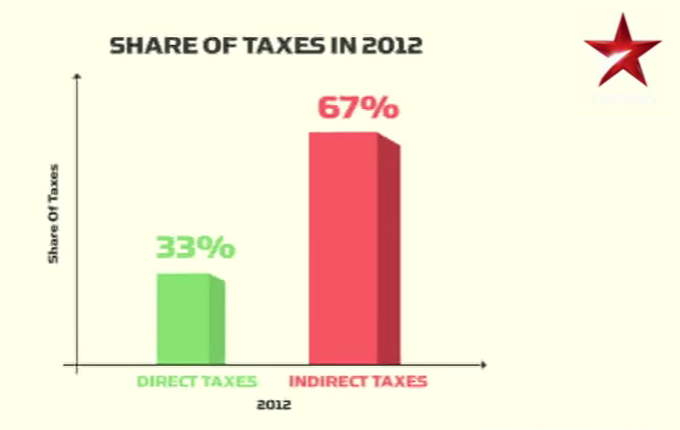 (As shown in Satyamev Jayate 2 - Kings Every Day)

From the above stats, we notice that Indirect Tax generates more than twice the revenue collected through Income Tax. And yes, Indirect Tax is paid by all, including people below poverty line. Even a 1 rupee match box is sold inclusive of all taxes.

How many people pay Income Tax?

As per reports from the finance minister, less than 3% people file Income Tax return in India. To be precise: Only 3.5 crore people, or 2.89 percent of the country’s total population of more than 121 crore, file income Tax return. In contrast, 45% people in USA pay Income Tax.

Who pays Income Tax and is it fairly divided?

The poor does not earn enough to pay Tax, the elite/high earners hire chartered accountants (CA) to evade/avoid Tax. The middle class has taxable income and don’t have money to hire CA. Salaried class are even more affected because Tax is deducted at source (no scope for Tax evasion). A survey shows that “Salaried Indians pay more income Tax than high earners in US, China”. Income Tax, in a way, is a harassment Tax for honest people. If you notice, all pay your Tax advertisements is something like this: Pay you taxes for a peace of mind. If we catch you, you will be jailed or heavily fined. #TaxTerrorism

People pay taxes because of fear and are not willingly. Corruption add to this by raising trust factors. Saving/Evading Tax is now socially accepted in general.

Hawala agents have moved a step further and registered fraud companies to do money laundering. They play active role in Tax evasion for a small share in profit. The money saved is called black money (mainly in the form of cash). This money is either moved into foreign banks accounts, or invested within the country in black markets (parallel economy).

Can we do away with Income Tax?

Yes, we can. Even if the Government abolishes Income Tax, it has potential to recover the same through other forms of Tax. Few arguments:

Eagerly waiting to hear your views in comments. And as always, Thanks for reading :)